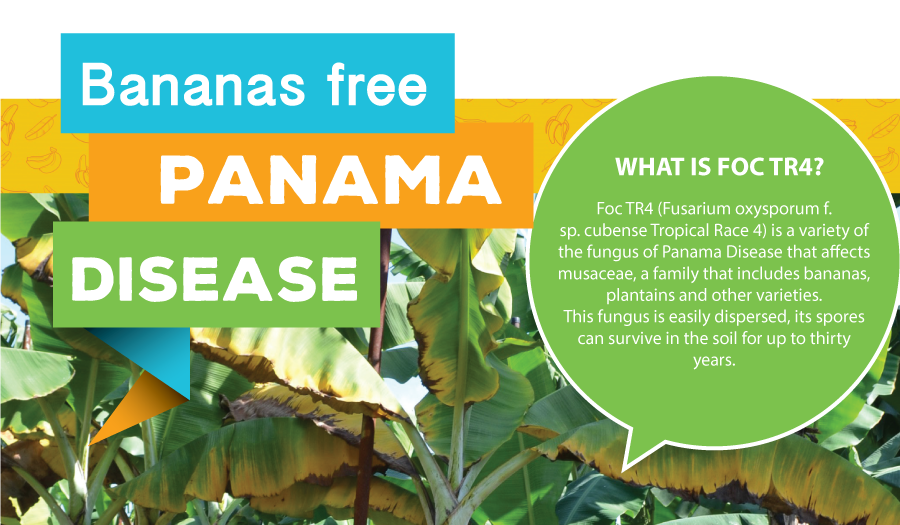 Buyers of bananas and their derivatives as raw materials must ensure their supply, choosing a supplier that ensures their supply and feeling confident that they are receiving a high-quality, disease-free product is very important to them. That is why we have compiled information that we consider essential to know about Panama Disease.

Let us remember that the Panama Disease is divided into four varieties, the most recent, the Foc TR4, the most harmful and for which many producing countries are alarmed by its presence and they fear for a possible entry into their respective countries.

The generalities of the disease and knowing its symptoms visually is very important, remember that once the disease enters the soil and contaminates a plant, it is practically impossible to get the fungus to contain itself, which causes it to spread throughout the plantation quickly and crops will die.

Despite scientific efforts to find a chemical to kill the fungus, this has not been possible. The possibility of improving some variety of banana so that it becomes resistant to the effects of the fungus has been one of the priorities, however, they have not yet been able to achieve it. By not having a weapon to eliminate it once it is present, it is so important to prevent entry to countries that do not yet have it present within their borders.

Many initiatives have been taken around the world to create funds to combat this disease and inform the general population, especially in countries where bananas are an essential crop for both local consumption and export. Entities such as FAO emphasize not minimizing the impact of the fungus, so it should be considered as a priority attention by agricultural entities in producing countries.

At this point becomes essential to have all the necessary biosecurity measures, both on the country's borders and on the respective farms. Without these measures, the fungus would easily enter countries where it is not yet present and would spread through materials that contain contaminated soil or even through living or dead plants (material for handicrafts) that can harbor the fungus.

In many countries the fungus is not detected yet, so you better pick a region where the pathogen is not detected and be sure that the govern, banana institutions and producers fight together against entry to its borders.

In Costa Rica, country of Central America, no case of Foc TR4 has been reported, their bananas are 100% free of this pathogen and that is why can guarantee the supply of your products. Costa Rican bananas are preferred by buyers due to their yellow color, characteristic taste and smell and smooth texture. Many customers around the world prefers Costa Rican tropical fruits, not only banana, because the climate in which it is cultivated favors obtaining optimum quality fruits with respect to products produced in less warm regions.